“Hollywood Finish” for the 2020 Pharmasave Radiothon for Healthcare 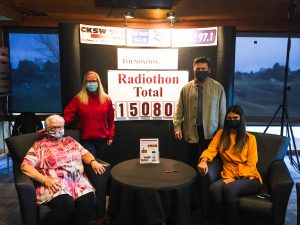 With minutes left in the 2020 Pharmasave Radiothon for Healthcare and just shy of hitting their $150,000 goal, in walked Doctors Kobus Steenkamp and Claire Kozroski from the Cypress Regional Medical Association with a last-minute $15,000 donation gathered from doctors who work in and around the southwest Saskatchewan healthcare system.

The donation in the last moments of the radiothon put the total up to 150,800 dollars, leaving Dekowny and others in attendance nearly speechless.

Doctor Kosroski however, put much of the credit on the people of the sou

“To see these people; these residents from all the towns, villages, the city here in southwest Saskatchewan, it’s just marvellous. I know, people don’t have a lot of spare cash. But they’re obviously stepping up and we all have those same goals. We all want to be as healthy as we can as close to home as we can.”

The two-day event, held at the Elmwood Golf Course’s clubhouse, saw a number of special guests drop by; from Mayor Denis Perrault to members of the Hunter Brothers, and Brittany Brodziak; wife of Chicago Blackhawks forward and Maple Creek native Zack Smith.

Dekowny admitted that due to COVID-19, he was unsure if they’d be able to make this year’s goal of $150,000 but was pleasantly mistaken to learn that in many ways, the number of donations exceeded previous years in a few different ways.

“You’ve got two ways to look at it. Everybody that usually spends tens of thousands of dollars going on holidays might have little extra savings because they can’t go anywhere. But there are also the people that are hurting right now, and have lost their jobs or are hired back on a smaller scale. So for me, it was the unknown. But the people of the southwest should be so so proud of what they did and how they’ve stepped up.”

Your ticket for the: “Hollywood Finish” for the 2020 Pharmasave Radiothon for Healthcare

“Hollywood Finish” for the 2020 Pharmasave Radiothon for Healthcare