Our History: A Tradition of Caring

The year 1999 marked the start of the Dr. Noble Irwin Regional Healthcare Foundation, which is an independently-operated, community-based, regionally-focused, volunteer-led, charitable, non-profit organization.

It is named for Dr. Noble T. Irwin (1921-1998), a respected Swift Current physician who followed his family’s tradition of dedication and deep caring with regard to health care. Dr. O.M. Irwin, his father, was chairman of the district medical advisory committee (1946) that negotiated with the Swift Current Health Region towards establishing complete health insurance in one corner of the province. Their commitments to the profession of health care services and to the community of southwest Saskatchewan are well remembered.

Dr. Noble Totton Irwin was born November 15, 1921 in Swift Current. He received his formal education at Central Public School and the Swift Current Collegiate Institute in this city and Ravenscourt in Winnipeg, Manitoba. Noble Irwin was married to Irene Spence on June 7, 1945. He attended the University of Saskatchewan and received his pre-medical training.

Following this he served in the army during WWII as a member of the 8th Reconnaissance, 14th Canadian Hussars Regiment. He was severely wounded at Normandy. After his discharge in 1945, he entered medical college at the University of Manitoba. Upon graduation in 1950 and following a year of internship, he returned to Swift Current to work at the Swift Current Clinic as a general practitioner.

In 1957 he began four years of training in Obstetrics and Gynecology at the University of Toronto, graduating in 1961. He returned to Swift Current Clinic where he practiced until his retirement in 1986. Noble was a member of the Royal Canadian Legion; 8th Reconnaissance, 14th Canadian Hussars Regiment Association; the Rotary Club; the Swift Current Curling Club; the Elmwood Golf Club and the Swift Current Archeology Society. In his spare time Dr. Irwin enjoyed gardening, hunting, golf and curling. Dr. Noble Totton Irwin passed away in Swift Current June 29, 1998 and, wife Irene passed November 20, 1999 both husband and wife are buried in Memory Gardens, Swift Current, SK.

The Foundation strives to do its work in the same spirit that he embodied for so many years. 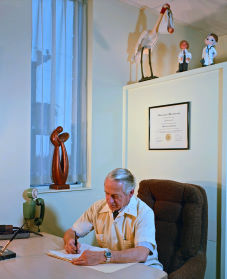 In the late 1970s and early 1980s my wife and I got to know Dr. Irwin and his wife and when Dr. Irwin retired in 1984, they commissioned me to do a series of “environmental” portraits. At the time I had no idea what impact these images would have until 27 years later. I knew they would be important to him and his family, as a reminder of what his work was all about, that is, caring for mothers-to-be and later their new babies. That is why I made a conscious effort to include his symbolic icons and the tools of his trade.

Now all these years later, long after the creation of the foundation bearing his name, I looked at the 4×5 negatives, and it dawned on me… it is time to share these portraits with the public by donating them to the Foundation. I had the negatives tucked away in my negative binder all those years and paid almost no attention to them, because they are colour negatives and they don’t give you much to look at. I was content to know his family has the original prints.

I decided to scan the negatives and have a look at the “positive representations”. It was an easy decision after that. By donating the images, I would be able to see them in the public domain and see peoples’ reaction to them.

We did photographs in his office in the Swift Current clinic, with some of his “tools” and instruments and ornaments that surrounded him as he worked at his desk. These images of him in his office are the ones that I like the most, because they show him at work, just as he would have looked on any given day.

We also did photographs in their home, as a couple, in his favorite reading spot. My wife and I found the Irwins to be very kind, sensitive and generous. Given that and all the good work being done by The Dr. Noble Irwin Regional Healthcare Foundation, donating these memories is the obvious thing do to.

All of the images were done in a Linhoff view camera, on 4” X 5” colour film, using a blend of natural and artificial light. I have included digitized copies on DVD as well. I hope people will enjoy looking at the portraits as much as I did making them in the first place.

Your ticket for the: Our History