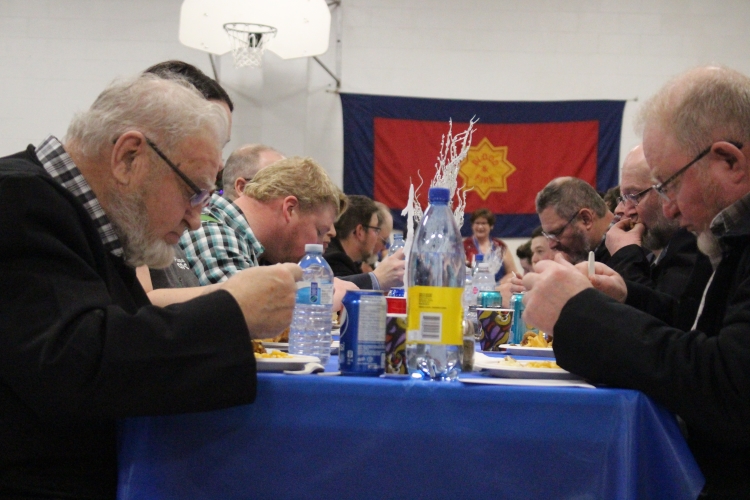 Continued Support from Hutterites in the Southwest

Hutterites around southwest Saskatchewan continue to support the Dr, Noble Irwin Regional Healthcare Foundation, but also the healthcare of the area directly.

At the Foundation’s recent annual general meeting, it was revealed that Hutterites are responsible for around $110,000 to $120,000 for the Foundation’s Close to the Heart Campaign for the purchase of a digital mammography machine.

They have also looked to support Swift Current and area through producing masks to help foster health during the COVID-19 pandemic.

The masks are being distributed by Bumper to Bumper – Great West Auto Electric Ltd, Swift Current.

Leanne Tuntland-Wiebe is the office manager at Bumper to Bumper – Great West Auto Electric Ltd in Swift Current, and is also a director of the Dr. Noble Irwin Regional Healthcare Foundation.

Tuntland-Wiebe said that Andrea Carol Miller helped to facilitate the distribution of the masks made from double-ply cloth and elastics.

“It worked really well, [Carol Miller] had more colonies come on board than she though, they’ve been going to a couple of places. A couple of the main colonies are Ponteix and West Bench. West Bench has been sewing like crazy, I’ve had thousands of masks from them.”

“It grew so that we had colonies in Manitoba at Steinbeck and I had a box of 500 come here from Steinbach Colony.”

One organizing member of the mask-making group from West Bench Hutterite Colony shared how they got the idea to help support those in need of masks.

“There was a write up on Swift Current Moms [Facebook page] that they need volunteers to make masks. Then I asked our ladies if they would be interested in helping me make the masks. We all got together one day and made them! We all pitched in with bringing the materials that we needed! We enjoyed making them, there was such joy in that room.”

Tuntland-Wiebe added that some masks were shipped to Toronto via Bumper to Bumper. Other masks have been shipped to Ontario, Regina, Germany and the Philippines.

“This week I had a lady in from the Philippines and she asked if I had any cloth masks left,” Tuntland-Wiebe said, “I said ‘yes I have some left, how many do you need?’ and she said ‘could I have 20?’ and I looked at her and said ‘yes I think I have 20’ and she had tears in her eyes.”

“I said ‘where are they going to?’ and she said ‘we’re sending them home to the Philippines, they have nothing, they have absolutely nothing there.’”

The masks are available for pick up at the Bumper to Bumper location for free, but they are accepting donations for the Dr. Noble Foundation there as well.

“If you feel the need that you’d like to pay or like to help in some way,” she said,” please make a donation to the mammography fundraiser.”

Masks from the Hutterites have been distributed to nursing homes and pharmacies in Swift Current in addition to anyone who picks masks up from the Bumper to Bumper location in Swift Current.

While they have helped distribute around 4,000 masks, Tuntland-Wiebe noted that production has hit a roadblock.

“I have just about run out, and from what I know, the colonies aren’t sewing right now because there’s a shortage of elastics because everyone is doing this.”

She added that they would happily accept donations of elastics for the production of more masks.

There is also another provincial mask producer in Saskatchewan Sews, who are creating personal protective equipment for those in dire need, such as those in northern Saskatchewan and first responders.

Tuntland-Wiebe said that she believes in spreading the word about donations from Hutterites, hoping they are able to show the appreciation from the community.

“The colonies, maybe some of them might have a Facebook page, but they’re basically going unnoticed or unappreciated because they don’t see it unless Andrea or I tell them and thank the colonies.”

“The people that come in and pick up the masks don’t have a direct line to the colonies. If we can get it out there that the colonies help like this, at least they know they’re appreciated. I’m not kidding when people come in with tears in their eyes because they’re compromised, they’re immune systems are down, and they don’t know where to get masks.”

She said that Bumper to Bumper was enacting their community philosophy by helping to support the area during the pandemic. She said that they are asking people to remember to support local people and businesses as many smaller aspects of the community are going through a tough time financially.

Tuntland-Wiebe said that Hutterites were following past precedent they have set when supporting healthcare. They have been constantly providing financial help to the foundation this year, as well as previous years.

“We’re in need of it for the mammography machine, it’s a pricey piece of equipment.”

Your ticket for the: Continued Support from Hutterites in the Southwest

Continued Support from Hutterites in the Southwest