Strong community support from across southwest Saskatchewan helped make the 2020 Pharmasave Radiothon for Healthcare a success and to achieve the Dr Noble Irwin Regional Healthcare Foundation’s goal of raising $150,000.

“It proved today that people care” Foundation Executive Director Jim Dekowny said. “People really want to give and they believe in what we’re doing at the Foundation, and it’s been a great day”

In a fitting conclusion to the event, the final cheque presentation was made by the Cypress Regional Medical Association. The donation of $15,000 helped the Radiothon to move past the fundraising target. 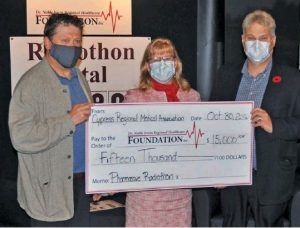 “All the doctors that look after everybody in the southwest decided to pool their money, not knowing that we’re going to be at $135,000” he said. “They give $15,000 and take us right to the end to finish it off. It’s a Hollywood, you know that I mean. It was a pretty cool two days. The resident of the southwest should be so happy and proud of what they’ve done these last two days.”

“We are so happy to help our patients individually, but it’s really a privilege for us as a group to also help the hospital, the surgeons and the whole area in terms of updating to some really needed equipment,” Dr. Kozroski said afterwards.

Dr. Steenkamp noted that donation is made from the financial contributions  of physicians toward their regional medical association.

“As physicians,  we each contribute on a monthly basis to our medical association,” he said. “We use the money for events, and if there’s money in surplus, we like to donate that to a worthy cause, and this is one of them. Radiothon  is one way of doctors giving back to the regional healthcare foundation.”

The funds raised through the Radiothon will be used to purchase a 4K ultra high definition laparoscopic surgical tower at the Cypress Regional Hospital.

“That equipment brings Cypress Regional Hospital and therefore our region up to the standard that our residents deserve,” Dr. Kozroski said. “The high definition really makes a difference. You could imagine what maybe your cell phone photo might have looked like 15 years ago compared to what you can see now. The same on your computer screen or tablet. So if a physician only has 2D resolution, he’s going to be much happier with 4K high resolution.”

The two surgical theaters at the Cypress Regional Hospital perform approximately 2,100 surgeries annually, including 900 cataract and 1,200 other lifesaving procedures. Surgeons currently use laparoscopic surgery towers in a 2D format that were originally purchased in 2009. A new laparoscopic surgery tower using 4K technology will provide surgeons with the latest technology during surgical procedures.

“The surgery is much more accurate,” Dr. Steenkamp explained. “So the outcome for the patient is much better and because it’s done laparoscopically, it reduces recovery time and it also reduces anaesthetic time. So all in all, it’s better for the patient.”

In past years the Radiothon took place in the foyer of the Cypress Regional Hospital, but it was not possible due to the COVID-19 pandemic. Dekowny felt the clubhouse at Elmwood golf course provided a good alternative that allowed sufficient space for following COVID-19 health and safety protocols.

“We had a great facility here.” he mentioned. “Elmwood golf course really stepped up and allowed us to social distance and keep things clean and keep people safe.”

Dekowny experienced some uncertainty before the event about achieving the fundraising target, because the Radiothon took place in the midst of a global pandemic.

“I thought it was going it be a big challenge,” he acknowledged. “You’ve goy the two ways to look at it. Everybody that usually spends tens of thousands of dollars going on holidays might have a bit of extra savings, because they can’t go anywhere. But there’s also the people that are hurting right now and have lost their jobs and are hired back on a smaller scale. So you didn’t know. To me, it was the unknown, for sure, but the people of the southwest should be so proud of what they did and how they’ve stepped up.” 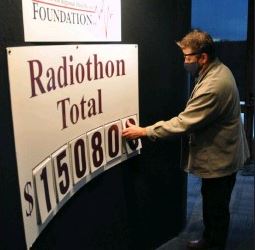 The Radiothon was well supported  by the business community. They made corporate donations, and various businesses provided prize packages that were available to win if people called in to make donations.

“It was a great corporate and citizen’s effort to raise this money,” he said.

This year’s event took place over two full days, from 9am to 5pm on Oct. 29, and from 6am to 5pm on Oct. 30. This is a change from last year, when it was only a 15-hour broadcast. According to Dekowny there were more donations this year, which was already noticeable on the first day of the broadcast. Healthcare foundation staff had to go back to their office to photocopy more receipt forms because there were not enough available at the Radiothon.

“We never thought in a million years that we’ll have this many donations,” he said. “It’s the southwest people. And not just Swift Current, but the whole southwest, right from Climax to Leader to Herbert to Maple Creek. They’ve all stepped up.”

Your ticket for the: Radiothon another amazing success…