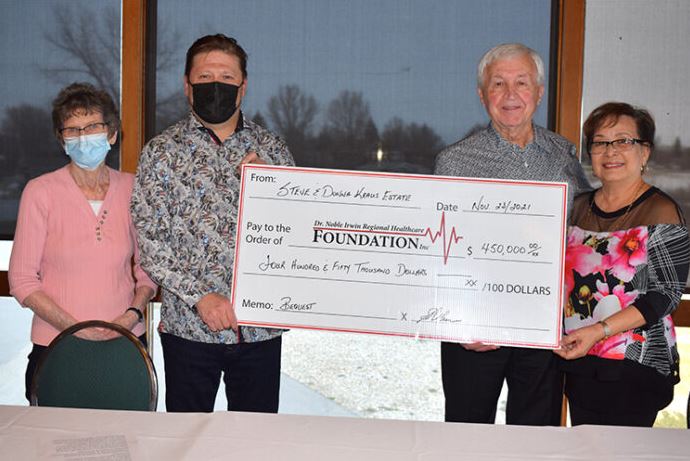 Kraus family friend and main estate executor Mary Hoffart joined Elizabeth and Sheldon Kraus in presenting a bequeath of $450,000 from the Steve and Donna Kraus Estate to the Dr. Noble Irwin Regional Healthcare Foundation which was accepted by Foundation Executive Director Jim Dekowny.

The estate of Donna and Steve Kraus has made an impactful donation of $450,000 to the Dr. Noble Irwin Regional Healthcare Foundation.

The donation, announced during a press conference at the Elmwood Golf Course Clubhouse on Tuesday, is the second largest bequeath made in Foundation history.

“This bequest will push Southwest Saskatchewan toward a higher level of healthcare excellence. We are inspired and truly grateful for this remarkable gift. It is very clear that Donna and Steve believed in the importance of having quality healthcare available to all residents of Saskatchewan,” Jim Dekowny, Executive Director of the Dr. Noble Irwin Regional Healthcare Foundation said during the November 23 announcement. “Their generous gift to the Foundation will enable current and future generations access to high quality healthcare equipment close to home.”

Dekowny noted the the remarkable gift helps magnify the Foundation’s mission for healthcare in the Southwest.

“We want to ensure that the funds go to the areas of greatest needs in Southwest Saskatchewan, and ensure that the Kraus family is properly honoured in each campaign they support.”

The Foundation is currently working with their partners to best determine which projects are most vital and the best items to receive funding.

Sheldon Kraus from Saskatoon, the nephew of Donna and Steve Kraus, attended the donation announcement as the representative of the family.

“I think it’s great,” Sheldon Kraus said of the bequeath in support of healthcare. “Uncle Steve and Aunt Donna made a decision many years ago that they were going to give back to society.”

The couple married and spent their entire working lives in Vancouver where they owned and worked together at a constriction business, and she also worked in the food service industry. In retirement they moved back to Saskatchewan to be closer to family, living in Wakaw and Swift Current. Steve Kraus passed away in January of 2010, and Donna Kraus passed away on June 28, 2020 at the age of 95.

As per their wishes, the majority of their estate was directed to three charities, the Dr. Noble Irwin Regional Healthcare Foundation, the Jim Pattison Children’s Hospital, and Telemiracle which will all be receiving $450,000.

“I think it’s great that they made that decision,” Sheldon Kraus said of his aunt and uncles generosity.