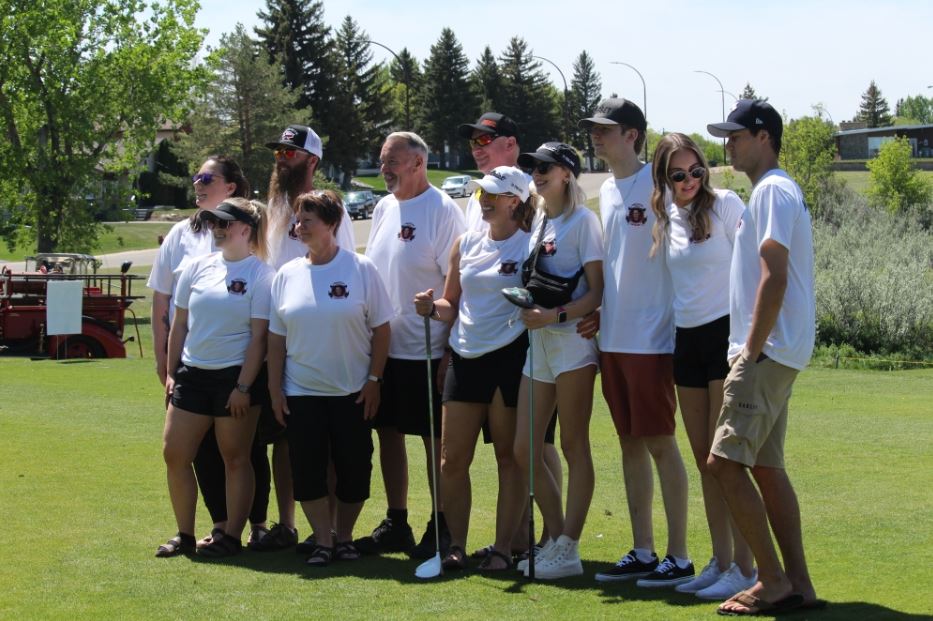 Shots were made and shots were taken last Friday at both the Elmwood Golf Club, and the Chinook Golf Course.

The event serves as both a charity function to raise money for EMS and firefighters in Swift Current, as well as to raise money that the Doctor Noble Irwin Regional Health Care Foundation will be putting towards new beds at the Mental Health Unit in the Cypress Regional Hospital.

Jim Dekowny, the executive director for the Dr. Noble Irwin Regional Health Care Foundation, both organized the event and was in attendance. It was his idea to name the event after Darren McClelland.

“We had renamed it the Bob Pollock Memorial Lobster Pot Par 3 Golf Classic,” elaborated Dekowny. ” While sitting on the tee and doing the speech for Bob, I looked over and I saw Nikki [Nicole McClelland, Darren McClelland’s widow]. I kept that vision in my head a while and got through the Bob Pollock Par 3, called up Kent Silbernagel and Duane Doane and said ‘guys I got a really great idea’.”

Both SIlbernagel and Doane were friends, of Darren McClelland, and had played with him previously in the tournament. They immediately got on board with the idea.

Dekowny proceeded to call Nicole McClelland to see if that was something she and her family would want.

“Jim Dekowny called me and said this is kind of what we want to do and they thought maybe about changing this tournament into Darren’s memorial,” remembered Nicole McClelland. “Darren’s been golfing in this tournament, right from the start, so this is a big day for him. He was always excited to play in this golf tournament with his buddies.”

With the approval from Darren’s family, the tournament was officially renamed the ‘Darren McClelland Memorial Charity Golf Classic’, and they got underway with planning.

On June 3, there were over 240 golfers present at the tournament. 144 of them were at the Elmwood Golf Club, and the other 100 played their rounds at the Chinook Golf Course.

Opening ceremonies were held at the Elmwood course, with buses taking the Chinook players to their course after the opening speeches were made.

Golf began at around 1:45 p.m. and went till 7 p.m. In the evening, the event concluded at the iPlex.

“We then did prizes and opened the bar, and Skip Neufeld and his band played through the rest of the evening,” detailed Dekowny. “I think there was about a 2 or 3 o’clock shutdown, so it was a long day, but it was a great day.”

Nicole McClelland had some heartfelt words for the event named after her late husband.

“It was a special day for him, so this means a lot,” explained Nicole McClelland. “Turning this tournament into his name and having such a beautiful day today, he would be so proud.

“Seeing all the people out and supporting such a great cause, to begin with, and then just to see it with Darren’s name attached to it,” continued a beaming Nicole. “It’s pretty humbling and pretty awesome to see.”

Your ticket for the: Inaugural golf classic debuts with massive turnout