Running the event in partnership with the Pollock family and Elmwood Golf Club was the Dr. Noble Irwin Regional Healthcare Foundation. Representing the Foundation was Executive Director, Jim Dekowny.

“Bob was the legendary golf pro here at Elmwood Golf Course for many years,” explained Dekowny. “He passed away a couple of years ago with cancer and we’re just we just doing this in his memory.”

The event was originally a small affair, only hosting around 50 people. Back then it was just a round of golf and a lobster dinner, with no affiliation with Pollock.

“Once we attached Bob’s name and the Pollock family got behind it,” commented Dekowny. “It’s just been absolutely crazy.” 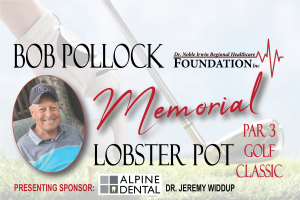 For two years now, they have had to implement a waiting list for the registry, so that everyone who wants to come out and play a round in the event gets the chance to. With the waiting list, the earlier people commit, the better the odds they will get to play. They also send out a save the date two months before the event, just to ensure everyone who wants to play has a chance to register.

All the money raised by the tournament goes to Cypress Regional Hospital. There it is put towards mental health beds and the cancer unit.

“It’s just been a great response from everybody,” said Dekowny. “A big thanks to Richard Berg, Steven Danielle, and Kyle Tisdale at the Elmwood Golf Course for this immaculate golf course.”